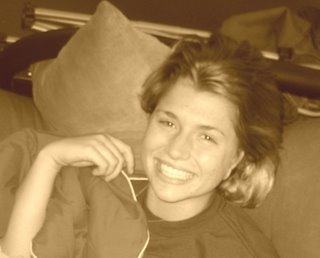 He's amazing everyone. And I'm not just saying that to sound girly. This man is profoundly amazing. You see, he's got this way about him. Always knows what I'm thinking and reminds me to remember that he's there. He laughs a lot! But never at someone...merely enjoying the medicine of the soul. But at the same time he is so passionate about people. He wants to see them with the Father. He's soft and gentle, but when he speaks...I don't think there's a soul that won't listen. He's got this way of convicting. Man. I wish you could see it in action. He can just say to me, "If you truly love me, it will show in the way you live, Amy." His words cut me to the core. He gently reminds me of "patience" and "gentleness", encouraging me to be bold and passionate about the God-given desires of my heart. And I just look up and receive.

You know how just know? I want to be with him for the remainder of my days...even longer. He's held my hand in these beautiful autumn walks. Every now and then, he'll remind me to look up and see this vast sky filled with stars. "I named that one, and that one, and that one", he'll whisper. He dances with me too! And I'm not talking about the waltz, although I love it when we do, but he'll stop me in the middle of the sidewalk and spin me around. Did I mention, we're always together?? OH! And I can't forget the way he sings to me at night. He'll fill my heart with this amazing sense of peace. And in the morning, when I don't really want to put forth the effort to get up, I just ask him to help me up. Haha...he lifts me up every morning. I feel weightless with him.

And what a friend he is! Seriously. You know how sometimes you feel like you talk too much about something? I never feel that with him! There is such a freedom in talking with someone who knows the inner-workings of your heart. I can vent to him as much as I want to and he's always listening to me! He never rolls his eyes. He cries sometimes, because I know it hurts him when I don't understand the Father's ways. But he never leaves me feeling ignored or unintelligent. He's beautiful. Sounds like the perfect lover, doesn't he? Being in this is unlike anything I've ever experienced before. He is perfect...absolutely 100% perfect...all of the time.

He did this outrageous thing a while ago. To show how much he loves me...I mean this was way beyond the roses, songs, dinners, dances, love letters. You see, I've done some pretty horrible things in my life. In fact, awful things. Time and time again, I turn my face against Jehovah so that I might receive affirmation from men. I was a prostitute, exchanging a feeling of acceptance and love for sexual immorality. I mean, no one should want me. No man. But he does! In fact, he's crazy. You see, before we even had met here on this earth, he knew me. He knew I would live and mess up.

So, over 2000 years prior to my existence, he presented himself as payment for my lack of faithfulness. Can you believe that?? I mean, he went before the highest officials in the land, claiming my trespasses as his own. But it kind of goes deeper than that. He not only took all of my stuff...but he took the stuff of everyone on this earth. The penalty for all of that is death. Yeah. I know. He died for me. It was brutal. He was flogged, carried a cross splintering his back, had a crown of thorns thrusted into his head, and...I shudder to think of this...had nine-inch long thick nails driven into his wrists and feet. Can you believe that??? It tore me to pieces. He had never done a thing wrong in his life...but he told me about what he did for me. "Jesus, how could you? Why?", I asked. "Amy, receive me...I love you...I want to be with you, dance with you, sing with you and run with you forever," he replied. And because of that...and absolutely nothing I could ever do...I can be with the Father forever!

He's kind of strong too. You see, being God and everything, he has this insane ability to conquer everything. So he didn't stay dead. But he gave me righteousness and then rose again! I spend every waking moment with him. People...sound the trumpets. I want EVERYONE in this place to know: Amy Carol Wolff is in love.
Posted by anonymous at 11:54 PM
Email ThisBlogThis!Share to TwitterShare to FacebookShare to Pinterest