He Uses The Nothings 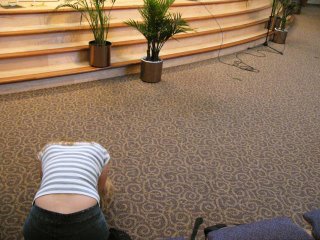 Ruth 4:14-15-"The women said to Naomi: 'Praise be to the LORD, who this day has not left you without a kinsman-redeemer. May he become famous throughout Israel! He will renew your life and sustain you in your old age. For your daughter-in-law, who loves you and who is better to you than seven sons, has given him birth.'"

So I finally can finish my online posting of Ruth. Took me long enough, I know. Ruth 4 is probably one of the most encouraging chapters. When I taught this to my study I delighted in the chorus of "Oooooh"s that rang when I turned over to Matthew. But we'll get there. Suspense...gotta love it!

First, let's look at how Boaz presents this situation to the first man in line to be kinsman redeemer. He first presents the man with the land. Like any normal man in that time, the man eagerly accepts. However, then Boaz brings in the hook.

"On the day you buy the land from Naomi and from Ruth the Moabitess, you acquire the dead man's widow, in order to maintain the name of the dead with his property." Don't forget the reputation of the Moabites. They were pagans. Boaz was wise with his presentation. He knew the man with whom he was dealing. I don't doubt that Boaz knew that this guy wanted land, but didn't want Ruth. Yet, Boaz was not hastey, but presented a fair opportunity for the man to fulfill his duties.

Sound like the elder in Titus 1:8? "Rather he must be hospitable, one who loves what is good, who is self-controlled, upright, holy and disciplined." Sounds like the type of man Proverbs 31 would look for...so naturally Ruth is attracted to Boaz. Do you know a Boaz? A patient man who knows his duty? Are you attracted to him? OR are you repulsed by his patience and unwillingness to jump in to things. I know I struggle with that at times. We so often want things right now! Like Naomi said in the previous chapter, "Wait my daughter and see what happens." Let's see what happened.

So...Ruth has this son...his name was Obed, who was the father of Jesse, who was the father of David...the infamous Psalm-writing, giant-killing king of Israel. But that's not all my friends...no, no. Flip over to Matthew 1 and read verses 5-16. Did you catch it? Ruth's blood was in the line of the MESSIAH!!! God used a "pagan" woman in His grand plan of redemption for this world. He used a "nothing".

So take heart in this!! Be encouraged that though you may not be a loud leader, your stance in faithfulness to those you love in Christ, your commitment to Christ through the hard times, your service for His people, and your love for Him will be used for GREAT things! Do not sit there and say "I am not capable". Romans 12:3 says "Do not think of yourself more highly than you ought..." Be sure to read that carefully. Though we are not to exalt ourselves above Jesus...we are in NO place to sit and destroy the God-given gifts because we feel bad about ourselves. We are His daughters. And yes, without Him we are nothing. But in Him, through His mind-blowing grace, we have the right to be called children of God.

So take a stand, work without expectation, commit yourself to loving others and pursue His word. Then, my dear ones, expect mighty things. Now doesn't drive you to your knees in worship?

Posted by anonymous at 8:07 PM
Email ThisBlogThis!Share to TwitterShare to FacebookShare to Pinterest

I just wanted to say that you're really cool and that I enjoy reading the thoughts that you post. Thanks for that, Amy.

We should get together again sometime. It's been a while. And I could use some coffee.