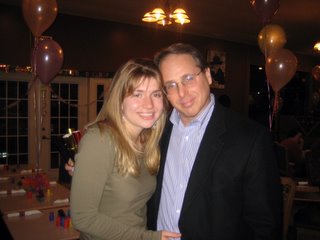 1 Corinthians 7:17- "Nevertheless, each one should retain the place in life that the Lord assigned to him and to which God has called him..."

So here begins another week. I had such a blessed weekend! Seriously, probably one of the best birthdays I've had in years. I was surrounded by people I love and who return that feeling. It was wonderful, in every sense of the word.

Now class begins again and back into the routine stuff. I have been called to serve the women in my life right now. I want to post a part of an email I wrote to someone earlier today to explain some of the things that are weighing on my heart. I know the title of my book now. "Welcoming Mary"

Pastor Bob's sermon was on Colossians 3...where Paul labels a few sins that we need to be ridof...sexual immorality, greed, lying. This is always arough subject for a church...you've gotta be bold and honest. For the most part, I loved it. Bob said was saying...to extent, there's just a time where you need to just STOP doing certain things. There are practical ways you can attack the sin. However, at one point, he addressed the sexual aspect. He, like many churches around, said, "I know some women who struggle withpornography, and if you do, you are an exception tothe rule." That statement broke my heart. Because hejust made any woman in the congregation (3x) feel alone. So you're not "statistically" sinning...I mean. Honestly! So after the service, as I was walking out, I was voicing my concern to my dad...and he said, "Why don't you talk to him if it bothered you this much?" Hah, so I marched back in, praying for grace and gentleness, and approached him about it.Characteristically of Bob, he listened and thanked mefor my comments. He would consider them and see if clarification was necessary. But Mark, the issue for me...far larger than his sermon, is that the church's attitude toward sexual sin and women reminds me much of the apostles' attitude toward Mary when she came to wash Jesus' feet. She LONGED to be in His presence...and she came, regardless of how they viewed her, but still they scoffed her. She was alone. She was SO vulnerable. Unfortunately, today that often leads to thoughts like "I must not be normal...I must not be a true Christian...I failed." And you lose another one. I almost cried. No joke. God has given me SUCH a heart for these women...the "Marys".

I think that's enough for now.
Posted by anonymous at 3:00 PM
Email ThisBlogThis!Share to TwitterShare to FacebookShare to Pinterest

ahhh! I felt the same way! I was not really a fan of the way he addressed women's issues, and he did it in a similar way last year. You know the struggle we all go through, you know my struggles, and you know that they were not addressed well. You pretty much amaze me a lot of the time.